The world’s most advanced processor with up to 12 cores for the world’s elite gamers.

Engineered to inspire and empower gamers, streamers, and creators. AMD?s Ryzen? 3000 Series processors, the most advanced desktop processors in the world, don?t just perform, they are designed to win.

Higher speeds,more memory, and wider bandwidth than the previous generation. 3rd Gen AMD Ryzen? processors with the 7nm ?Zen 2? core2sets the standard for high performance: exclusive manufacturing technology, historic on-chip throughput, and revolutionary overall performance for gaming.From the beginning AMD?s 3rd Gen Ryzen? processors were designed with this philosophy, to break expectations and set a new standard for high-performance gaming processors. That?s exactly what it does.

When you finish gaming, swap over to getting work done with effortless speed using 2nd Gen AMD Ryzen? processors with Radeon? graphics, part of the AMD Ryzen 3000 Series. Office apps, photo editing, web surfing and watching top streamers are a breeze thanks to the incredible multithreaded processing. AMD Ryzen? processors with Radeon? graphics are powered to deliver high performance fidelity you can see.

** Max boost is the maximum frequency achievable by a single core on the processor running a bursty single-threaded workload. Max boost will vary based on several factors, including, but not limited to: thermal paste; system cooling; motherboard design and BIOS; the latest AMD chipset driver; and the latest OS updates. Visit www.amd.com/pb2 for more details.

1. AMD product warranty does not cover damages caused by overclocking, even when overclocking is enabled via AMD hardware. 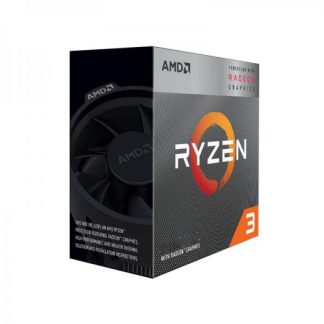 You're viewing: AMD RYZEN 3 3200G WITH RADEON RX VEGA 8 GRAPHICS PROCESSOR ( upto 4.0 GHz / 6 MB cache) ₹8,500.00
Add to cart
Wishlist 0
Continue Shopping
We use cookies to ensure that we give you the best experience on our website. If you continue to use this site we will assume that you are happy with it.Ok